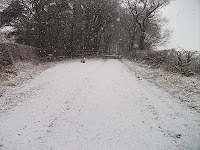 Last weekend, I attended a weekend writing course in Fishguard, although the snow that fell on Friday nearly stopped me from going. Thankfully the main roads were clear and I reached a sunny Fishguard.


The course I attended was Kate Walker's Writing Romance. I think it's an absolute must for anyone wanting to write romantic fiction. Next year an advanced course will be run by Kate in Fishguard and I look forward to meeting up with many of those who attended this year. I have been so full of inspiration since returning that all my spare time has been devoted to writing, which is why I'm a bit late blogging about the weekend.

Socializing with other writers is also very much part of the weekend, as the other courses offered ranged from painting, to short stories and poetry. Meeting new people and catching up with familiar faces is so much fun. I'd recommend it to every aspiring writer.

As I started with a bleak snowy scene, I'll leave you with the view from the hotel on Saturday morning. 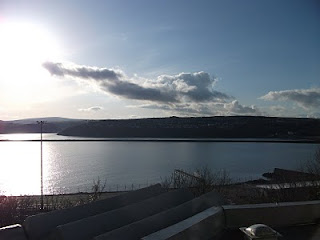 As today is Valentine's Day I thought I'd blog about why I write romance and where I am now with my writing.

I often wonder if it was because I was born on Valentine's Day that I love romance so much, but really I just can't help it. Whether it's a book or a film, I just love romance and want to immerse myself in it all the time.

I was in my late teens when I discovered Mills and Boon romances. I read as many of the historical romances as possible and one day wondered if I could write one. So I sent away for the guidelines, then in the form of a cassette and made quite a few attempts at my own romance, but these early scribbles remained just that. It was all so much harder than I thought.

As life moved on, my desire to write was put to one side, but I always read as many romance novels as I could. I married and had two children and it was when my youngest was two the need to write resurfaced and I applied for a home study course on creative writing. This took me from article writing, to short stories and onto the novel, where I had to submit the first chapter of my novel, which was of course a romance.

Shortly after, I met Brenda, who was starting a writing group in our village, the group, Cwrtnewydd Scribblers is still going now after over seven years. As a group we looked at writing romance and had local published author, Liz Fielding join us for a workshop. Liz writes for Mills and Boon's Romance line and we had just a few hours in which to gain an insight into what goes into a romance novel. This was when the need to write romance became ever stronger and I soon had three chapters completed. This time my story was aimed at Mills and Boon's Romance line - or Tender as it was then.

Liz Fielding also introduced me to Kate Walker's 12-point guide to Writing Romance. In this wonderful book, I discovered that Kate Walker was tutoring a course, for Writers Holidays in nearby Fishguard. In fact I shall be there again next weekend.

Ever since that first course, I have been completely dedicated to writing a romance which will hopefully, one day, be just what an editor at Mills and Boon is looking for and have now completed four books with the last three being aimed at their Modern line.

So really, you could say that writing romance has been a lifelong ambition of mine. Have you an ambition that has been with you since childhood? Maybe you have achieved yours?
Posted by Rachael Thomas at 21:12 6 comments:

Over the last few days there have been a few successes with writing in my house.

Firstly, my daughter was entered by her school into a competition to write a mini saga in less than 50 words. Her entry is now going to be published through Young Writers in a book titled Mini Marvels which will be available at the end of April.

This was her entry.

The Beginning Or The End?

The tension was unbearable. Amy had to open

the envelope as soon as possible. She wasn't

expecting much. Her heart pounded in her chest,

everyone held their breath. Her hand ripped

open the letter. Her eyes lit up, all A's. This was

the beginning of her life!

The other success is that I have just had the results back from round one of the Emerald competition, run by Romance Writer's of Australia. My first three chapters have gone into the top 15 and the complete manuscript will now go onto round two. The idea of the competition is to mirror the submission process.

Entering competitions is extremely useful, especially when you get feedback from the judges as you do with Romance Writer's of Australia. This enables you to see your strengths and weakness through a reader's eyes.
Posted by Rachael Thomas at 10:12 1 comment: 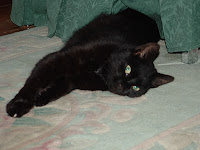 Like many farms, we have feral cats, but during the last few months I have been catching these hissing bundles and taking them to the vets to be 'dealt with'. Once this is done, they come back to live peacefully with us, without increasing their numbers any further.
This is Twm, one of the first to be 'dealt with' and he is one of four who come into the house for a sleep sometimes. The others live either in the calf shed or the old cow shed.


This little project of mine, has been financially helped by Cats Protection League and one of their local volunteers has loaned me the required traps. It never ceases to amaze me, that within days of being set free, after having given me the run around to catch them, they want to be friends! 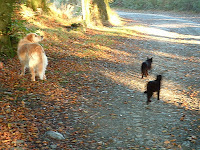 A few of them even come with me when I walk the dog, although Tara is not impressed, as you can see from this photograph which was taken last October.

I have only two left to catch now and they are proving to be the hardest ones as I keep getting all the others who just want to be friends.
Posted by Rachael Thomas at 09:54 No comments: